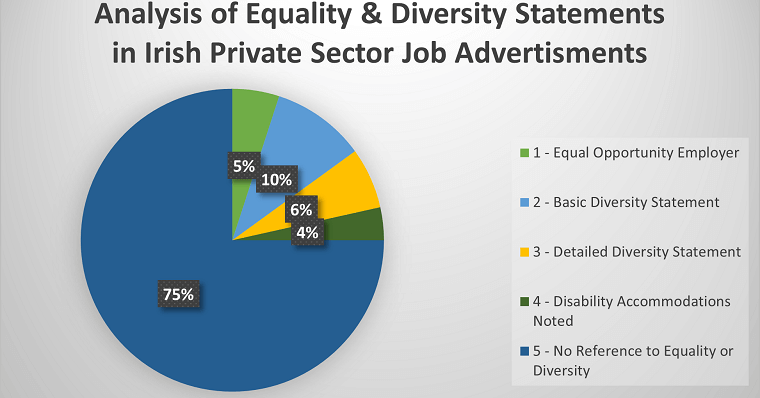 75% of job ads in Ireland have no Equal Opportunity Statement

In their Annual Report published April 2021, the Workplace Relations Commission (WRC) stated that complaints related to disability discrimination under the Employment Equality Acts were the highest number of complaints made to their office in 2020. This numbered more than any of the other eight protected grounds in Ireland last year.

There is very much a rising tide of rights recognition in Ireland relating to disability, especially in the area of employment and recruitment. Increasing numbers of complaints are falling under the Employment Equality Acts 1998 - 2015. Most importantly, following the Supreme Court decision in July 2019 in the Marie Daly v Nano Nagle case, the level of onus on organisations to provide Reasonable Accommodations has significantly increased.

Any public or private sector organisation who interviews a candidate with a disability during the recruitment process is required, as far as is reasonably practicable, to ensure all reasonable accommodations are considered, to give that person equal opportunity in the recruitment process. Failure to provide accommodations to candidates with a disability may result in a complaint made under the Employment Equality Acts.

A candidate with a disability should only be assessed on their suitability for a role when all reasonable accommodations have been factored in. Only then are they to be properly considered, giving them an equitable chance of securing employment.

This application of the law has traditionally been viewed through the lens of individual companies who interview job seekers during the recruitment process. There are myriad cases brought before the WRC where organisations (both in the public and private sector) have complaints registered against them due to a failure to give appropriate consideration to accommodations both during the recruitment process as well as during the course of a person's employment. This is termed the 'procedural aspect' to the reasonable accommodation.

The recruitment industry, as the initial point of contact for so many organisations seeking assistance with sourcing candidates, is placed in a particularly precarious position.

Job advertisements, interview techniques, premises accessibility, website accessibility, staff awareness of disability and appropriate disability etiquette are all potential pitfalls which (not only result in a failure to demonstrate best practice disability inclusion) may lead to a future complaint relating to disability discrimination being made.

Application of the law relating to Reasonable Accommodation and the Employment Equality Acts 1998 - 2015 relates not only to organisations who seek to recruit new talent, but also to the representative third-party organisations who advertise and interview on their behalf.

This fact appears to have not been recognised by many yet. In this writer's opinion, it is only a matter of time until we see an increase in claims of disability discrimination being brought against those third-party organisations.

The first opportunity for any organisation to publicly demonstrate a commitment to providing reasonable accommodations is when jobs are posted online. This was the basis for conducting the 'Data Analysis of Equality Statements in Job Advertising' during Q3 2020.

The following analysis confirms a wide-ranging lack of equality statements in Irish job advertising across the private sector, public/non-profit sector and especially the recruitment industry.

A demonstrated effort to address this lack of equality statements is important in ensuring greater inclusion and acknowledgement of a widely untapped talent pool of people with disabilities. It is also the first step in demonstrating to disabled jobseekers that reasonable accommodations will be provided.

With well over 650,000 people in Ireland living with a disability, inclusion of this group will benefit public and private sector businesses, recruitment agencies as well as a hugely diverse pool of talented job seekers with disabilities.